So, for my friends birthday he wanted to see Godzilla. I was skeptical. The only Godzilla I’ve liked previously was the one on the Chewits advert. Naturally, I wasn’t expecting much, but it turned out to be surprisingly watchable, and dare I say it, enjoyable. Some core character developed moments almost make you emotional. Although some felt rushed, and too many good characters killed off too soon.  I won’t go into too much detail as I don’t want to spoil it for you – but this WILL contain SPOILERZ.

But as I watched it, I found myself easily suspending my belief in  prehistoric dinosaur-like-characters hidden underground and oceans near radioactive earth materials, but couldn’t believe at all that people would be ok and survive mass total body irradiation exposures.  That’s what studying radiobiological physics does to you, clearly.

Before studying radiation oncology, I knew some radiation was bad, such as ionising radiation. But I didn’t know why it was bad, and the limits of it and just how much is really bad.  Using Godzilla as an example, I am now going to briefly (and super basically) try and use it as a case study on what effects a person may have if exposed to this radiation in real life, using key-research data from Medline, Scienceproxy, PubMed, ect, and from government bodies and legislation based from evidenced based practice & research.

Firstly, we are surrounded by radiation. Of all sorts. Such as light, radiowaves, mircowaves and so forth. This is non-ionizing radiation. It’s relatively safe and rarely causes damage to tissue. However ionizing radiation is different. We’re exposed to low-dose ionizing radiation coming from lots of places, such as cosmic rays, soil radioactivity, environmental contaminations, and medical interventions such as having an x-ray. Ionizing radiation comes as photons, x-rays, gamma rays, neutrons, protons, ect. Radiation with sufficient energy can ionize an atom by knocking out an electron from the shell of an atom, creating a positive charge. This ionization causes damage by breaking chemical bonds. Since a cells main component is water, when ionizing radiation strikes, it breaks the H20 chemical bond creating an oxide-free radical, which causes indirect damage to the cells DNA. (Fun fact: This makes Oxygen a radiosensitizer!)

But here’s the tricky part. We have no idea if there’s a minimum safe ionizing radiation dose. The chances are, there isn’t a safe exposure because any interaction with ionizing radiation *could* cause cancer in the future. The probability of occurrence depends on the absorbed dose and the severity is independent of the absorbed dose too. A threshold doesn’t exist. That’s the point. It doesn’t matter whether  you just had a CT scan or was a character in Erin Brokovich. This is called stochastic effects. The effects of any exposure, no matter how small, and the consequences of this small exposure are random. As a result, a lot of radiation protection is designed around investigating and protecting us from unnecessary exposure which could cause genetic damage. YOLO.

The biological effects of radiation can be divided into two categories:

and b) latent  (chronic) effects.

There are three types of acute effects of radiation:

The relationship between acute effects and absorbed dose are listed below:

Chronic effects are seen at 6 months + from the exposure. It consists of two categories: somatic effects and genetic effects. The former refers to the effects occur on the exposed individuals (e.g. cataracts, radiation sickness, cancers, etc.) while the latter occurs in their future generations because of mutations of the genetic cells.

Taking all this information, we now look at Godzilla (2014 version).

Radiation Protection at all times, yo!

Opening scene, we see Breaking Bad dude fixating over some crazy readings (tremors) at the nuclear power-plant that he works at. He’s worried people won’t take him seriously. My first reaction is like whaaaaaattttttt? Any incident needs to be reported. The other nuclear power plants in the area aren’t reporting it either.

Then he sends his wife down to check it out. (bad move, dude). And then something happens, and he wants the guy to put the doors safety on override. The guy’s like, “I can’t do that!” But does it anyways. It’s fine man, let the radiation out.

Then, you know some pipes burst. And there’s some sort of nuclear explosion happening which is chasing them up the corridor. At one point the pipe bursts on them, i’m assuming this would be radioactive or REALLY hot. But the people seem to be relatively unfazed, not burnt, just  a bit shocked.

So the Breaking Bad dude stands there, hoping his wife is going to make it before this radiation, cermet, probably REALLY hot cloud of hot mess radiation gets to him. At this distance if it is full of radioactive substances, the guy will be exposed to it. We’re assuming this cloud is full of high-intense ionizing radiation, as in air it can produce a visible blue-purple glow from ionizations. Just as it looks in this screenshot.

At this stage, the dude has really exposed himself. There is no doubt about it. I would argue that this would be enough exposure for vomiting in hours. Maybe hair loss in weeks to come. At the very least. His blood levels would have dipped and normal haememoposis would have been badly disturbed/disrupted. Get this guy some medical attention as he may have had acute radiation poisoning (he doesn’t in the movie though). Not to mention the radiation exposure he has leaked into the rest of building.

Interestingly, take note of all safety procedures in place. These doors are built to with stand neutrons and other crazy high level particles. He still has control at the door for emergency shut/stop.  Would we argue that this long corridor should have been a maze?

Then if that’s not hard enough, all the people and his wife are there.  Behind the door. He knows he can’t open it, plus the safety manual over-rides aren’t allowed, probably, and he can’t just press open during an emergency. Here all these people are very energetic, they look ok. I would argue that even though they’re wearing protective clothing, it wouldn’t be enough to with stand this amount of exposure. I would expect radiation burns, fatigue, and nausea if not vomiting.  She then takes off her mask?! I mean, like whoa girl. These people will probably die within hours without medical attention. 😦

Then the poor kid has to watch the power plant collapse. All these residents are going to get some sort of radiation exposure. Studies in radiation biology show that “a single radiation track (resulting in the lowest exposure possible) traversing the nucleus of an appropriate target cell has a low but finite probability of damaging the cell’s DNA.” (cox, 1995) Subsets of this damage, such as ionization “spurs” that can cause multiple damage in a short length of DNA, may be difficult for the cell to repair or may be repaired incorrectly, creating potential for a future cancer.

and his teacher has just left him, unaccounted for, in the class room. Is this really real safety evacuation procedure? She should have made sure that all the children left the classroom together.  If we take evidence from Chonobyl, then these kids could increase their chances of developing thyroid cancers since the exposure can cause an intake of radioactive iodine fallout.

Two radionuclides, the short-lived iodine-131 and the long-lived caesium-137, are particularly significant for the radiation dose they can deliver to members of the public after an explosion/irruption of a nuclear power plant like the one in Godzilla.

And this is just the first 15-20 minutes of the movie! I won’t go through the whole movie as I don’t want to spoil it for you. But basically throughout the whole movie, we consistently see people being exposed to & handling high levels of radiation toxic materials and continue for days without seeking any medical attention and are absolutely fine.

What can we learn from this?

Things are in place to make sure that we are exposed to the very least of ionizing radiation. IRMER (2000) has set rules and regulations that we all follow in Medicine and IRR for radiation exposure in industry and in general. The most important thing we can take from Godzilla in regards to radiation protection is that any abnormality, any question regarding the integrity of safety and quality needs to be reported and assessed and operations should seize to be investigated until everything has been OK’d.

Also, don’t like, try and tempt monsters with nuclear weapons just 20 miles off the coast of a major city (San Fran). Like, are you guys foh serious? That’s some bad-ass-decision making. 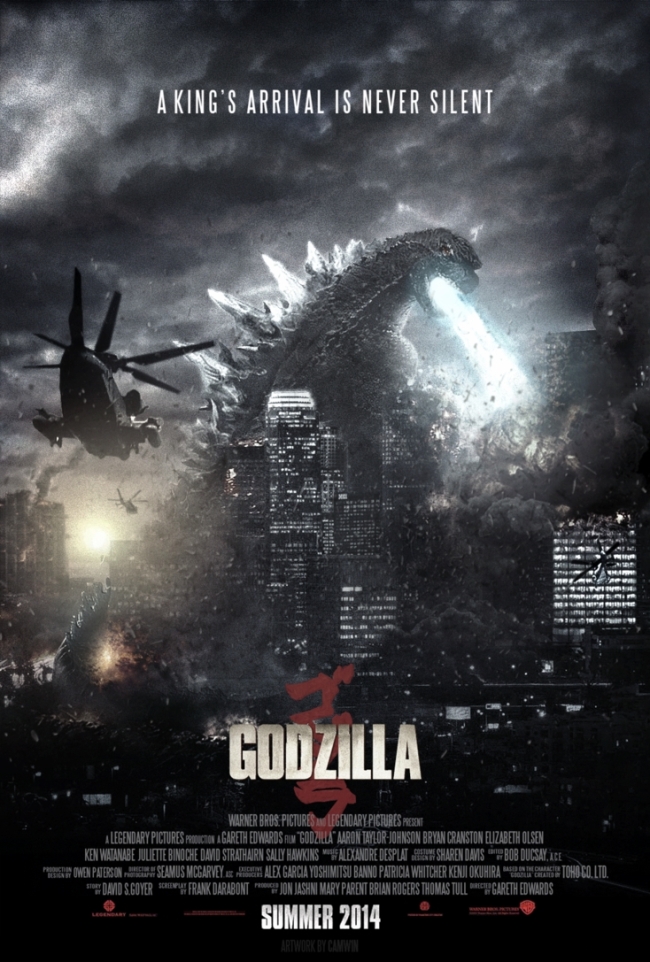